Posted by Shiv Senthivel at Thursday, January 27, 2011 No comments:

Is your battery alive ?

It is understood that over a period of time the lifeforms that we see around will tend to be cyborgs, augmented mechanically for greater functionality. In a complete flip we have seen a machine (ok battery ) augmented functionally by a biological entity. Researchers have found that the efficiency of a Li ion battery can be enhanced many times over by getting tobacco mosaic viruses to attach themselves to the electrode. Shades of Arthur C Clarke and Rama.....
Read more here.
Posted by Shiv Senthivel at Saturday, December 11, 2010 No comments: 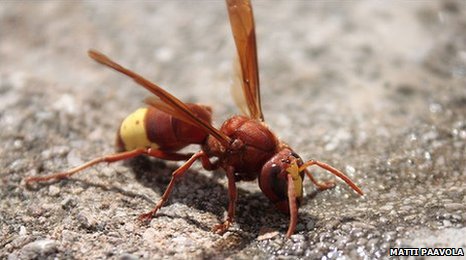 This amazing insect has been found with solar harvesting structures in its abdomen. Read more here.
Posted by Shiv Senthivel at Thursday, December 09, 2010 No comments:

Video on the Sensei Fukoka's method

There has been a lot of noise on the "2G spectrum scam" where the UPA telecom minister stands accused of policy formulations that have cost the country 1.7 Lakh crores of lost revenue and personal corruption. Leaving the personal corruption angle aside (lets assume for the sake of argument that it's true) a simple dissection of the matter at hand yields the following inferences.

1. The 1.7 lakh crores is the retrospective interpolation of the average yield based on the numbers achieved in the 3G auction.
2. If a similar yardstick is applied to say , power distribution by state owned disco's, every power minister can be accused of exactly the same crime of causing the nation losses of lakhs of crores of 'potential revenue'. Ditto for fertilizer, road transport and virtually any sector that is granted some public subsidy to increase penetration. Hence either the review methodology must be applied across sectors or telecom should be understood as a GDP multiplier.
3. The teledensity when the government of the day (NDA) moved from spectrum auctions to revenue sharing, is a small fraction of what it is now. It can be argued (and quite convincingly) that the growth in teledensity was inversely proportional to the cost of ownership and prevailing call rates. The single largest reduction in call rates can be directly attributed to government allowing lower spectrum charges which resulted in lower call rates and increased competition. Also spectrum costs went from cap-ex to be expended before rollout to op-ex that could be paid as it were generated.
4. Obviously the biggest beneficiaries are telecom users, also know as aam aadmi etc. The maid who takes care of my house has 2 phones on a monthly income of say 8-10 K. Would this kind of equitable usage of spectrum happened if the government keeps the call rates in the stratosphere ? Contrast 12 rupees a minute to 30 pisae for the same in 10 years.
5. If the CAG formulas are applied our average call rates will still be in the 2-3 rupees range. how does this benefit the common man ?
6. 3G is now slowtracked successfully by auctioning the spectrum at ridiculous prices. End of the day the telecom companies dont pay for the spectrum, you and i do and that's why ARPU is so important in the business. What we need in this country is cheap and abundant data bandwidth, internet penetration in india is still bad as the cost of broadband is prohibitive even today.
7. Now the same is being applied to mobile data. Looks to me like a conspiracy to keep data exclusive and out of the reach of the common man. If anything there should be a JPC to probe the de facto hijacking of spectrum (a finite resource) by the elite. Keeping out the riff-raff, in the best traditions of the british raj !!
Posted by Shiv Senthivel at Monday, November 29, 2010 No comments:

A very serious issue that has been off the radar for many people seems to have been finally understood. Once cannot underestimate what CCS will do to the agrarian economy. Finally after blaming pesticides, cell phone radiation and maybe even the little green men from mars, entomologists working with US army researchers have fingered the culprits as a deadly combination of a virus and a fungus (saprophyte). Read more here.
Posted by Shiv Senthivel at Saturday, October 09, 2010 No comments:

what is the higher judiciary smoking ?

The Allahabad high court finally came up with it's crack smokers verdict on the Ramjanambhoomi- Babri masjid title dispute for which almost a century of wrangling has passed. To say the summaries i hear at this point are shocking is to put it mildly. Clearly this is an attempt by the judiciary to have a go at policy rather than interpret the law which is what they are paid to do. Watch this space for more analysis once the judgment copy is public.
Posted by Shiv Senthivel at Thursday, September 30, 2010 No comments: